When young 32-year-old Jonathan Bellshaw unhealthy eating habits lead him to reach almost 300 pounds he realized he had to make a change in order to run and be there for his young son.

Bellshaw decided to begin a rigorous new morning workout regime by jogging in his local park EVERY morning, and during one of his most recent runs, he found an envelope taped to traffic light he passes regularly. He had no idea that his newly-found will power and dedication would spark the attention of  this  kind inspired stranger.

The letter was addressed to “the guy with the run for Blood Cancer t-shirt and the dogs,” with a plea to “read this letter.” At first, Bellshaw thought he might have upset or offended someone somehow, till he opened the letter which brought him to tears. 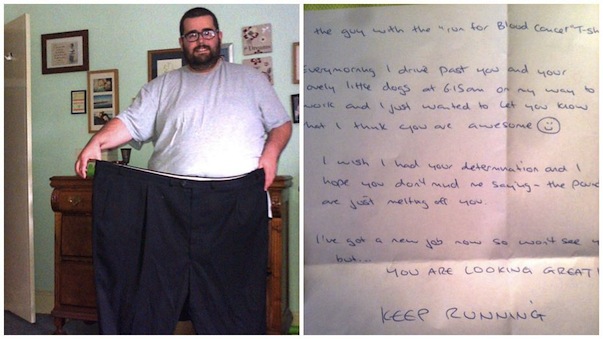 “To the guy with the ‘run for Blood Cancer t-shirt’,

Every morning I drive past you and your lovely little dogs at 6.15am on my way to work and I just wanted to let you know that I think you are awesome.

I wish I had your determination and I hope that you don’t mind me saying – the pounds are just melting off you.

I’ve got a new job now so won’t see you, but you are looking great – keep running. Signed, Lucy”

The inspiring letter touched Bellshaw that he decided to try to find Lucy and thank her in person. He then posted the letter and his story on Facebook, and within a few hours the post was shared almost 1,000 times.

That same night, Lucy came forward! Bellshaw learned that Lucy was also trying to lose weight after the birth of her baby and found herself motivated and inspired by Bellshaw’s determination.

Bellshaw continued healthy dieting and running four and seven days a week,  even competed in races, and is now down to an incredible 170 pounds!!

What an inspiring story. Keep up the great work!! 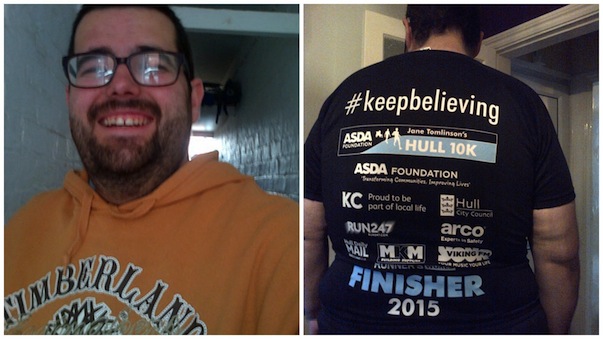